Here is the top of the page 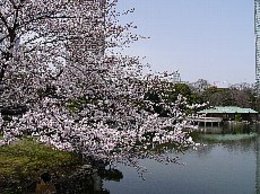 The Edo Period pond was a tidal pond that depended on the intake of seawater from Edo Bay. It had two duck hunting sites within the grounds. The garden is a typical example of the famous gardens of the Edo Period.
In 1654, the younger brother of Ietsuna, the 4th Tokugawa Shogun (Matsudaira Tsunashige, the ruler of Kofu) had part of the shallows filled in and built a residence on the reclaimed land that came to be called Kofu Hama-yashiki (Kofu "beach pavilion"). Later, Tsunashige's son became the 6th Shogun, Ienobu, and this residence became the property of the Tokugawa family. On this occasion, the name of this residence and grounds was changed to "Hama Goden" (Beach Palace). From that time onward, various Shoguns made changes to the garden. The garden was finally finished at the time of the 11th shogun, Ienari, and has remained basically the same down to the present time. After the Meiji Restoration, the garden became a Detached Palace for the Imperial family and the name became the Hama Detached Palace. The Great Kanto Earthquake and World War II bombings caused a great deal of damage to a number of the buildings and trees and rendered the garden unrecognizable, but on November 3, 1945, the Imperial family gave the garden to the City of Tokyo and it became open to the public in April of 1946. On November 22, 1952, Hama Detached Palace Garden was designated a famous site as well as a site with high historical significance.